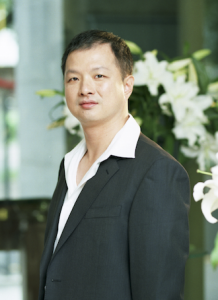 Ting-Yi Ma is one of most active composers in Taiwan. He has gained a reputation as a fusionist to merge traditional Chinese materials with atonal music language. He received his doctoral degree from Indiana University at Bloomington in 2003, and studied with, among others, Claude Baker, Eugene O’Brien and Frederick Fox.

In 2004, his Formosa Nostalgia (2003-2004) won the second prize at the「2004 International Formosa Composition Competition」from Council Cultural Affairs of Taiwan. In 2003, his Nostalgia IV for Cello Solo (2002) won the first prize at the Art and Humanities Award from Ministry of Education of Taiwan, and the same year his piano piece Blessing to the World through God Almighty (2000) was selected to perform at the College Music Society 2003 International Conference in Costa Rica.